While there are many things that we look to get a bargain on when we shop, one of the I have learned not to compromise on is honey. It might sound silly- honey is pretty delicious to start with- why be picky? I asked myself the same thing, until I had truly local, raw honey, straight from the hives of two of my favorite Farmers, Dick and Diana Dyer. Diana is a Registered Dietician (and blogs here), and she and Dick got into farming as a full time gig several years ago. Their original specialty is garlic, another "common-place" thing I have learned to become picky about; once you realize there is more out there than just elephant garlic out there, it's hard to go back to the plain old grocery store variety!

Getting back on topic, I tried some of the Dyer's Washtenaw Wildflower honey earlier in the summer and I was hooked! The taste of home "grown" honey is far more deep, rich, and complex than the standard store bought kind. It's just amazing. As soon as I found out there was a second honey harvest this fall- a flavor entitled Fall Farm Goldenrod, I made sure I picked up 2 quarts of the stuff before it disappeared! It's a bit darker and not as light on the tongue as the summer honey, but just as delish!

If you can find local, raw honey, and support a family of incredibly nice farmers in the mean time, I suggest that you run out and purchase yourself some ASAP!
Posted by Arika at 8:10 PM No comments:

Our roommate Paul is sort of a renaissance man- at least in my opinion! He bakes, he cooks, he has a record player, he plays an instrument.. you have to admit that he sounds pretty cool, right? Anyway, the reason I'm bragging about him is that he makes lots of homemade goodness that I get to try. Last week, he made BAGELS!

Let me just say- This family loves us some bagels. We almost always have bagels on the countertop, and they can get expensive! My favorite local ones, Barry's Bagels, which taste like smooshy semi-cooked chunks of dough (in the best way possible) are $3 for 4 bagels at our local co-op. When Paul made these homemade bagels, they were amazing; they even looked bagely! He was nice enough to make a batch with me, so I could learn.

Today, I made a batch all by myself; I'm going to share the recipe with you, because they are easy to make, and I want to bestow the skills of bagel-making upon everyone who reads this blog. Best of luck- tell me how your bagel-making experiences go! Settling into the Winter Routine again

Winter is rolling its way here in Michigan, although you wouldn't have known it by the temperature yesterday- incredible weather! I've been getting back into what has been my Winter Routine for the past several years;
Turning to use the food I've canned, frozen, or have stored;
Heading over to the Ann Arbor Farmers' Market on Saturday mornings in search of root vegetables, winter-hardy greens, local herbs, honey, and other winter goods;
Making and eating a lot of chillis, soups, and stews.
It feels good to have been at this whole "homesteading" thing long enough to even have a routine to return to. Each year, I get a little closer to being more self-sufficient, although on the whole I'm still very far away from that goal.

This year it seems I'll be all set through most of the winter squash, sweet potatoes, potatoes, carrots and onions, meaning I'll be able to eat those things locally throughout the entire winter, based on what I've grown and/or bought locally and stored. I also have some canned corn and green beans that will probably get me through at least until January or February. I've got 5 pints and 7 half pints of jam, which will last me until next year's jam-making begins.

I'm going to try to focus on utilizing the root vegetables I have and getting what I can locally as far as winter greens goes, and will again this winter try to avoid purchasing produce that is way past its' season: Peppers, fresh corn, etc. The same goes for fruits- I'm going to stock up on apples that will last for a while in my chilly "mudroom" space.

I usually cave and purchase frozen fruit in the winter because I start to crave it; we're lucky around here to have a great Winter CSA called Locavorious- they purchase locally-grown fruits and vegetables while they're in season and then they flash-freeze them, so folks can have this great produce available all-year round! While I didn't purchase a share from Locavorious, they are usually at the Ypsilanti & Ann Arbor Farmers' Markets and I love that I can still buy local in the winter!


What's your technique for eating local in the Winter?
Posted by Arika at 4:03 PM No comments: 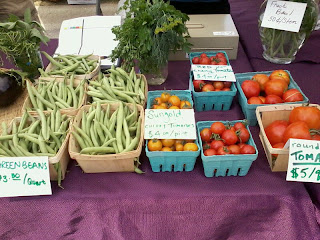 The organization I work for is helping small-scale growers in the area to sell their produce at the Farmers' Market we run by supporting a pilot year of an Ypsilanti-based Market Garden Co-operative.

If you're not familiar, a Market Garden Co-op is a group of smaller growers that would like to sell in a market setting but most likely don't have enough produce to justify having their own stand or stall at the market. Growers can become Members or Sellers, and they basically buy in to the group in order to share a stall space with other small growers. Proceeds from the stall are shared in different ways, and Market Gardeners can pool resources like tables, a tent, chairs, and other infrastructure pieces. The Co-op also shares costs in things like advertising and promotions, so I wouldn't have to have my own business, business name, flyers, etc. 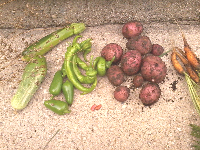 Right now, I am doing one of my favorite things; focusing another Crazed Project! I've mentioned this tendency in recent posts- my love of taking on a potentially out-of-reach project and being obsessed with it until I can make it a reality :) The new project on my mind recently has been growing some produce for the market garden co-op!

I've been thinking about growing carrots for Market, specifically. It seems that we almost never have carrots available at our Farmers' Market, and they're kind of a staple crop- I mean, people eat a lot of carrots, right? I've heard that carrots are hard to grow, or maybe they're just hard to grow in our soil here in S.E. Michigan. I've had a lot of success with growing carrots at home, and I think I'd have to put some work in to grow market-quality carrots, but it could be very possible!


There are several steps I would need to take in order to prepare for selling at Market:
Carrots would also be a good option for me to sell at market because I love them, and they store well. So if I don't sell a lot of them, I will be able to eat them up and store them for my own use without feeling like I "lost" money.

Thoughts? Opinions? Advice?
Posted by Arika at 9:58 PM No comments:

Dark Days Challenge- will you join me?

This year, I've decided to join with other garden/foodie bloggers in participating in the Dark Days Challenge! As part of this challenge, I'll be making at least one meal each week that featuring sustainable, organic, local, and ethical ingredients, and blogging about it to share with others! I think this will be a great way for me to strategically use some of the veggies I've been storing; potatoes, carrots, squashes, onions, and find new recipes and meals to feature them in! Please tune in here to check out the dishes I make- if you're interested in learning more, see below!

Dates
The challenge runs from Sunday, November 27th, 2011 to Saturday, March 31st, 2012.
What’s the Challenge?
I will cook one meal each week featuring SOLE (sustainable, organic, local, ethical) ingredients, write about it on this blog and email a recap to the larger group on the Not Dabbling in Normal blog.
What does local mean?
Traditionally, local food challenges call for a 100 mile radius. Winter time is more difficult in many climates, especially if you’re new to eating locally, so my default winter definition is 150 miles. If you'd like to participate, you can choose to make your radius smaller or slightly larger as you need. Typical exceptions to the local requirement are oils, coffee, chocolate and spices. If you’re making fewer or more exceptions, please note that on your first post.
How do I sign up?
Head on over to (not so) Urban Hennery to find out more info and to sign yourself up if you'd like to participate as well!
Posted by Arika at 6:39 PM No comments:

Putting the Garden to Bed for the Winter

Today, I was overcome with Garden Fever again! Occasionally I will be suddenly compelled to do a crazed home or garden project. Last month, it was making a Root Cellar out of 5-gallon buckets. The month before, it was creating a "built-in" storage area for the jars I've put up. Last winter, it was building an entire seed starting set-up in my basement. Today, it was finally placing the remaining 40-odd cinder blocks that have been sitting in my driveway for 2 years! I muscled-up, and  lifted about 50 cinder blocks to form a reaaally long raised bed- 4 ft x 36 ft! This will add about 144 square ft to my total edible veggie-growing space, bringing the total square footage up to 341 sq ft of raised bed gardening space

<----------- Check out the new addition:
I've started planning what I want my garden layout to look like next spring. It's way too early to be thinking about this, I know. But laying out a garden plan is my version of geeking out. Others may play video games, scrabble, or DnD; my "cup of tea' is planning, strange as it may seem.

This year, there have been several major homestead successes, and several things I'd like to improve upon for next year:

Improvements for 2011:
+ Add 144 sq ft of garden space
+ Grow enough carrots, onions, & potatoes to eat in summer and last until January
+ Grow and dry more beans- goal= 2 pints of dried beans
+ Try to start everything from seed indoors this year (except for carrots, onions)