Crocuses, Tulips and Hyacinths- Oh My! 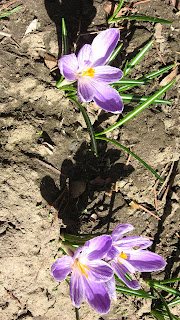 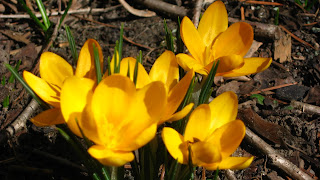 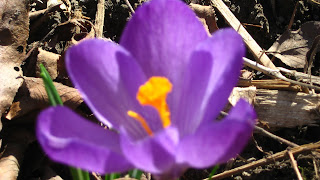 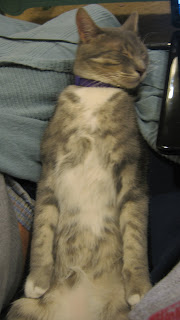 Backyard progress aka thank you to my parents for their yard skillz :)

This week we had a big project: build our raised-beds and a new compost bin with the epic amount of cinder blocks I have, as well as tending to some of the yard, etc! There were two willing guest helpers: my mom and my dad! They love to be outside and doing projects, which is a lucky quality for us :) We spent all yesterday grooming, pruning, painting, lifting, placing concrete blocks, shoveling, and sweating!
Here's some action shots!
Mike laying down the landscape fabric to go under our beds: 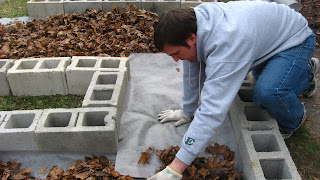 Mom adding some leaves to the bottom of the beds: 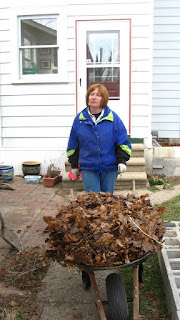 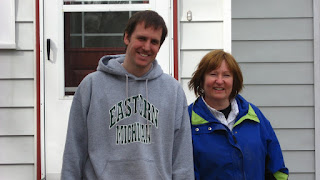 Finished beds (minus compost/soil that is coming tomorrow).
It's kind of an "S" shape, like the beds over at  Grow and Resist: 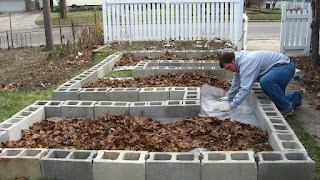 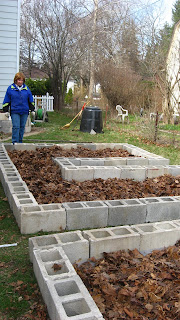 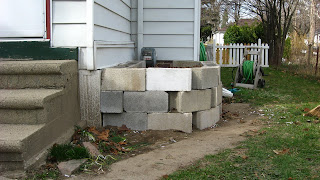 Hot damn! :) Tomorrow is soil delivery! Getting projects done feels so good! More project updates to come
!
Posted by Arika at 11:52 AM 1 comment:

So I stopped by Lowe's today, and although I make a point to buy most everything that I can locally, I could resist getting some flower seeds... because they were there in front of my face :)

Here's what I got!:
The Rudibeckia and the Echinacea will go in the front garden, and on the sides of the house. The Aubrieta will go in our window boxes out front of our house, and the Marigolds will go in those holes in the cinder blocks on our raised-beds! :) La la... now I just need to read more about when to plant these exactly. 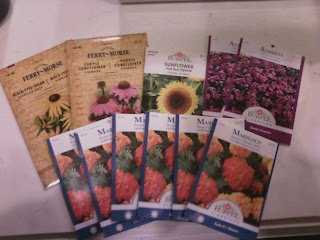 Yesterday, after much anticipation, my cinder blocks finally were delivered- 225 of them! (that's 3 pallets if you're a constructiony person). Thank god there were two 20-year-old boys to unload the blocks- it would have taken me 10 hours, no kidding! 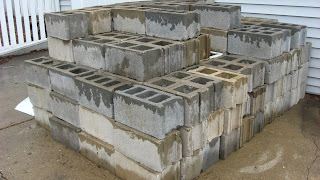 Most of them are now resting in my driveway (see above), but Sara and I did place a few to see what kind of bed configuration we would actually be having. I think they look pretty good!

Here's some pictures of the bed: 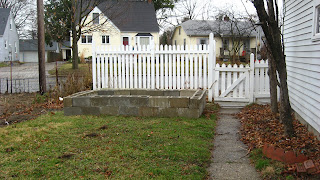 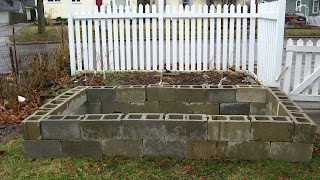 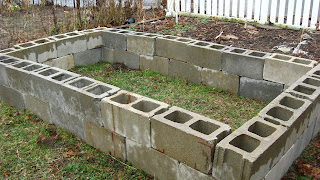 Also, my mom took this mosaic tile class, and she made us this awesome address plaque for our front porch: 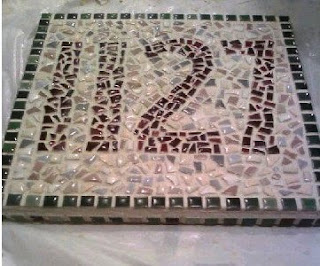 I need to check out all the blog posts I missed while I was in Columbus for the weekend!!
Two Frog Home, IBKC, Adventures in Urban Homesteading, Mark Maynard, & Little City Gardens here I come! :)
Posted by Arika at 4:50 PM No comments:

Pardon my french, but holy shit it is so SO so nice outside today!!!! Although I have a robot neck, I am going to go outside any way and dig some things. It's so warm in my house- I turned off the furnace system completely!

On the bright side, soon I will have raised-bed gardens that look like this!!!: 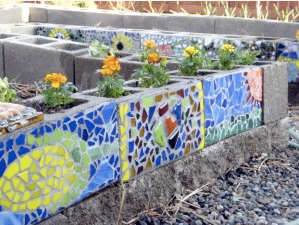 This is a picture of Meg's garden over at growandresist. This is her picture, her garden, not mine! I am posting this picture, giving her full credit, because it is an incredibly awesome idea and I have decided to use cinder blocks for my raised-bed gardens too!

I have 3 pallets of cinder blocks coming today (225 block total). Each block is 7x7x16, so I will need a total of 208 blocks total for 4 raised-beds that are 4'x14"x12'. WoohoooooO! Mike will probably be delighted to come home and see 225 cinder blocks on our driveway. I know I would be :) I'm going to try to get them placed before he comes home. Doesn't that sound like a good thing to do with a neck injury?

We'll see what the doctor says first, I suppose. Off to get checked out! I'll posted some updates once the massive delivery gets here!

I had quite a weekend this weekend! This is un-homesteading related, but sometimes, I just have to share!

Some of the fun highlights that I'll share with you are:

So overall, it was a pretty productive weekend. If not productive, I would at least say action-packed. :) I can't take the vallium during the day or I will fall asleep so I am going to try to tough it out at work today and see what happens.

Here's the canning cabinet Mike and I put up: 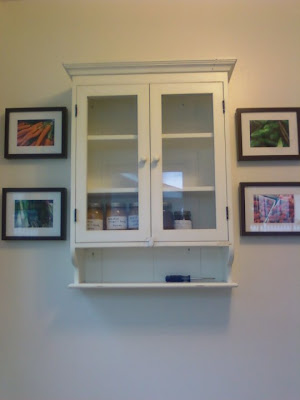 and here's a kitten for you (Athena!): 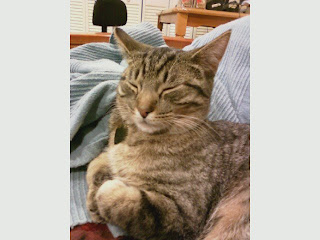 I'm getting ready to build my rasied beds this weekend and next week, to prepare for all the plants I will need to be picking up in a few weeks!!

I'd love input from you all if you have built rasied beds before.
Am I doing it right?

I don't want chemicals leeching into the soil, but I also don't want to re-build my bed frames every 4 years. That could get pricey! My goal is to get the beds built by next weekend, March 20th!
Posted by Arika at 6:54 AM 2 comments:

I ended up using Aimee's suggestions for preparing the chicken, and I poured some red wine into the cavity of the chicken, along with sliding some garlic slices and some butter between the skin and the meat of the bird. I cooked it about 90% of the way and then put it in the slow-cooker to flavor the broth. Here's the finished results: 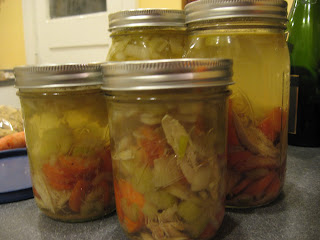 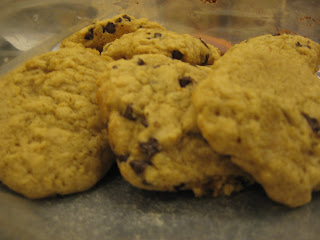 Here's the recipe I used:

I had that icky feeling today- the one where you're getting sick but you can't really do anything about it? That's the one. I headed by the Co-op on the way home from work and picked up some carrots and some celery, and I already had the chicken in the freezer. I just got home from work and I'm starting on my roasting chicken project. I guess it's not so much of a project- it's more just like roasting a chicken.... I am making chicken noodle soup in an attempt to stave off illness! 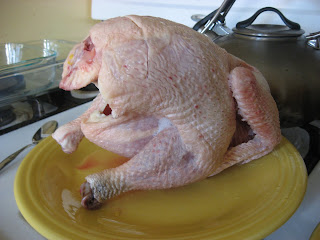 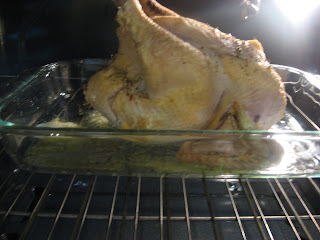 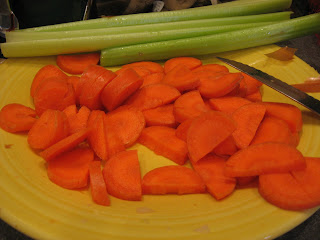 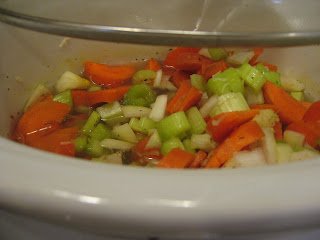 Mike and I went to Chicago this weekend, and we had a great time! We went with a couple we are friends with, and really had an ideal trip- got to see sights but didn't overwhelm ourselves with too many activities. If I had planned it, we would have been running around the city the whole day and we would have been exhausted! So I just sat back and went with the flow, which is rare for me, but I really enjoyed being spontaneous! Who knew! 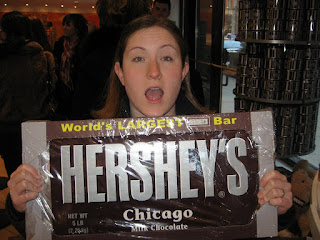 Just FYI, I didn't really buy this :)
Anyway, I've been to Chicago several times, and each time I go, I just want to ride around on the 'L' the whole time! It's not as new as some of the other transportation systems, but it's efficient and fast, and it gets you where you need to go. I know that Ypsilanti is infinetley smaller than Chicago, but it's so nice to have a comprehensive public transportation system! The bus system here is pretty decent, but it doesn't run very late into the evening, and I wouldn't want to ride it very late into the evening either!
I can't wait for this: http://www.semcog.org/CorridorStudies_AADD.aspx The Ann Arbor to Detroit Regional Rail project! October 2010!!! I don't know how much the fares will be or anything like that- but it would be awesome if there were some cheap fares to A2 or Detroit! Then instead of driving there, we could walk to the Ypsi Freighthouse and ride on in!!
Until then, I'll just have to look out to Chicago with transportation envy.
Posted by Arika at 3:21 PM No comments:

I just stumbled upon Little City Gardens, located in San Fransico, and I think I'm in love!!

These two women, Caitlyn and Brooke, have team up to try to run a viable micro-farm that will sustainan and support two individuals.

I think this would be a wonderfully fulfilling job. Little City Gardens grows salad greens, and sells to a local restaurtant, along with operating a small CSA, and selling to some caterers. The more I continue in this homsteading adventure, the more I am wishing that I could truly devote my time to it. There is something so satisfying about planting with your own hands, and growing food to sustain yourself and other with your own resources. Maybe (probably) it's just a pipe dream, but I am going to further investigate what it might take to make a living (or supplimental income) from my own yard. Things I'd like to check out:

Today I am inspired to reflect on how I am doing so far on my 2010 goals
(thanks Kathie @ Two Frog Home)!
Since I've been reading The Backyard Homestead, I have a much better idea of what kind of specific layout I could have in my backyard for my food crops, and some more solid thoughts about how to put my ideas in to reality! In addition, here are some other Homesteading things I have been working on:

On a seperate note, below is me in my favorite outfit, and I hope I get to wear it soon!!
Jeans + a hoodie + Birks= love!