Rain and a Rhubarb recipe (and alliteration)

There's a lot of rain happening here. Across the country, in fact. It feels semi-apocalyptic: way more apocalyptic than the recent rapture-that-wasn't. In the past week and a half, I have been caught in three separate downpours, where I am completely drenched in a matter of minutes. Quite weird.

At any rate, I am continuing along, apocalypse or not. The garden is almost all planted- potato plants are doing nicely, tomato plants as well. My onions are being totally strange and aren't seeming to grow at all, which is worrisome. I keep planting carrots, and they don't seem to be seeding to well, but I have some beginning to think about growing. 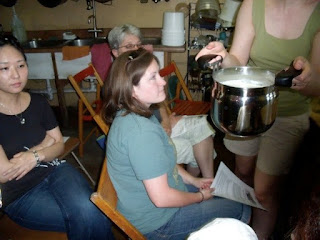 Our local co-op hosted a Cheese Making class recently, and I couldn't pass it up! It only cost $5 and for $5 more, I was able to purchase all the necessary bacteria/ingredients to make several future cheese endeavors! We made Queso Fresco and it was delish. I haven't yet tried to make a batch at home but I think I might soon- of course those endeavors will be documented for ya'll to see. Check me out on the right! I didn't mean to look highly-skeptical, and in fact, that is actually my "This is so cool" look.

If you're local, check out Preserving Traditions for their class schedule. Great group, very affordable to attend, and fun!

Trip to Greenfield Village!
Today Mike and I, along with some friends, visited Greenfield Village, local historical attraction and part of The Henry Ford family of things like Henry Ford Museum and Henry Ford Imax Theatre etc. etc. It was pretty cool to see- Greenfield Village is basically modeled after a village of sorts, and it contains all sorts of old, awesome buildings, including the homes of Noah Webster (of dictionary fame), Robert Frost, a Circuit Court building where Lincoln presided as judge, the Wright Brothers' house, etc. I am a big fan of old homes and just being able to tour them and look around was entertaining to me. It was also Civil War Memorial weekend, and there were a bunch of tents sent up and folks in re-enactment outfits, marching around and staging fake battles. Cool old houses and marching- doing well on my list of exciting things so far!

One thing I thought was kind of strange is the fact that all of the houses in Greenfield Village have been uprooted and brought to this Utopian society of Greenfield Village. All were clearly labeled on signs in front of the houses, as far as where they came from originally.
But doesn't Dayton, Ohio want the Wright Brothers house?
Because I kind of want Dayton to have the Wright Brothers house.
Robert Frost's house was from Ann Arbor, not too far of a move. The Lincoln county court-house thing was from Illinois or something. While I do realize that moving all of these awesome attractions means that maybe more people can experience them, I bet there are some upset cities out there. There were several cases where the city supposedly couldn't afford to maintain the house, and so Ford swooped in and bought it (this was back in the 20's and 30's.) I can handle that, I suppose. But I like the idea of place- when I can walk from the Wright Brothers Dayton home to a newly-freed black family's Savannah, Georgia home, doesn't that lose some of the character, some of the story of the house? Maybe it's the annoying, local person in me. But I like to appreciate things where they are meant to be appreciated.

They had a cool farm though, so props for that. The re-enactors were chopping up rhubarb to make a pie inside the farm house and one of them mentioned that they had to take advantage of it now because it's only in season for a short time. Of course, this was met by several, "Oh, really" and " When does it grow, exactly?" comments. I felt kind of good to know I have farmers' market fresh rhubarb at my house ready to be appreciateted.

Peach-Rhubarb crumble recipe!
Enough with the politics. Onto a delicious recipe for you canners out there! I have been trying to finish off the harvest that I put up this year, in order to make room for new things this year. I seem to have a lot of peaches left over that I keep forgetting to break out and enjoy. I also got inspired by the folks while at Greenfield, and wanted to make use of the rhubarb I've been paralyzed by for the past several days. I whipped up this Peach-Rhubarb Crumble, and it was a hit! Serve it warm for delicious oozyness, or cooler for a more congealed treat. If that doesn't inspire you to make it now, I don't know what will.

Directions:
Pre-heat the oven to 375 degrees.

Empty the pints of peaches (including syrup from 1 of the jars) into an 8x8 or 9x9 baking dish. Chop up rhubarb into pieces sized to your choosing, and add rhubarb into the dish as well.

In a separate bowl, melt butter, then add sugar and flour and mix gently. Once mixed (doesn't not need to be mixed super-thoroughly), sprinkle mixture on top of the fruit in the baking dish.

Pop dish in oven for 40-45 minutes or until crumble topping is crispy & delicious. Enjoy!!
Posted by Arika at 11:48 PM